Eurocolumbus was born in 1972; during 2004 it
was the first Italian company to equip its C-arms
with Flat Panel Detectors (then produced and
marketed by VARIAN, now named VAREX); this
generated a very rapid technological growth. In
the following years the final product was totally
updated and renewed while following the original
project, which was based on an isocentric
and motorized C-arm, very safe thanks to the
anti-collision sensors and a generator separated
from the X-Ray tube.

Eurocolumbus is the only Italian manufacturer
of C-arms that can boasts a real internal R&D
department. The equipments are entirely designed
and built in the Milan factory (Italy). Since
2016 Eurocolumbus has been part of an important
industrial group that boasts 23 research centers
and 75,000 employees worldwide; this significantly
increases the guarantee of continuity
of the Company on its way to the continuous search
for innovation and eco-sustainable quality. 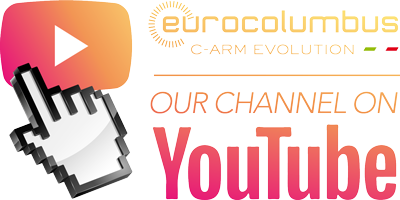